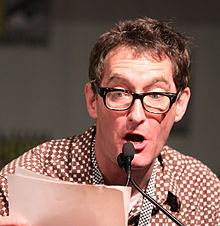 Born Thomas James Kenny, Tom Kenny has been a highly successful voice actor for many years. Some of his best known works are as Eduardo on “Fosters Home For Imaginary Friends,” Heffer Wolfe on “Rocko’s Modern Life,” and possibly his most famous character and his personal favorite: Spongebob Squarepants.

When he was young, he went to Bishop Grimes High School, where he became friends with famous actor, Bobcat Goldthwait. Kenny worked with Goldthwait on his personal projects, “Shakes the Clown,” and “World’s Greatest Dad.” Kenny also had a brief cameo in the movie “Sky High.”

Kenny has also been on other projects such as, “How I Got into College,” “Comic Book: the Movie,” and “Animatrix.” Kenny brings an interesting kind of style to all of his performances.

Kenny is also married to actress Jill Talley, who is the voice of Karen on “Spongebob Squarepants.” They met while working on the movie, “The Edge.” They, since being married, have had two children together.

Tom Kenny is a very influential voice artist, who still works hard to this very day. I can only hope his hard work and diligence keep him up to speed for years to come.