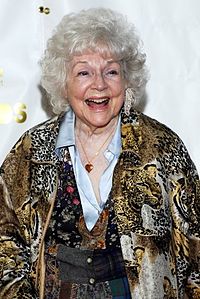 Born Lucille Therese Bliss, this lady is a wonderful voice actress that I’ll never forget. Some of her famous works include Anastasia on Disney’s “Cinderella,” Smurfette on “The Smurfs,” and Ms. Bitters on “Invader Zim.”

Bliss has also appeared in movies like “Assassination,” “The Night Before,” and “Miracle Mile.” She has also been known to sing from time to time. In 1961’s “One Hundred and One Dalmatians,” she was the singer of the “Kanine Krunchies” jingle, where she pulls off the voice of a very young child.

A long time ago, she also hosted a television show called, “The Happy Birthday To You Show.” She was also a narrator of a few Disney shorts on the album, “Peter Rabbit and Other Funny Bunnies.” She shows a wonderful set of skills in all she does.

Lucille Bliss is a woman who many people will remember for a long time, because of all of the excellent voice acting and performances she does. She was a well renowned woman, and always will be.