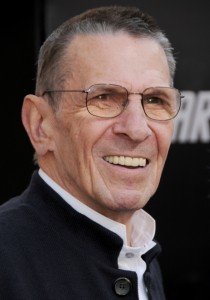 Leonard Simon Nimoy is an actor whom I shall pay tribute to today. He has voiced characters such as Master Xehanort on “Kingdom Hearts: Birth By Sleep,” Mr. Carapace Clavicle Moundshroud on “The Halloween Tree,” and King Kashekim Nedakh on “Atlantis the Lost Empire.”

Aside from playing such vocal performances, Nimoy was most famous as Mr. Spock on the Star Trek franchise. He has long been remembered for perfecting the saying, “Live long and prosper.”

Nimoy wasn’t just Spock, though. He has also played in movies such as “Zombies on the Stratosphere,” “The Balcony,” “Assault of the Wayne,” “Seizure: the Story of Kathy Morris,” and “Never Forget.” He also directed a few movies such as “Three Men and a Baby,” “The Good Mother,” “Funny About Love,” and “Holy Matrimony.”

Leonard Nimoy lived a long and wonderful life. He has brought on such a vast legacy that no one can forget. Many people will remember all of the dedication he brought to his performances, and will be relevant even in a farther time.