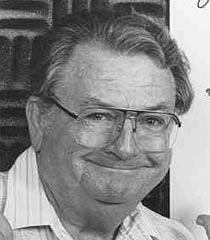 Born Donald Earl Messick, Don Messick has been one of the biggest voice actors known. He had created voices for characters such as Boo-Boo on “Yogi Bear,” Hampton J. Pig on “Tiny Toon Adventures,” and possibly his most famous voice, Scooby Doo.

Messick had originally wanted to be a ventriloquist, but he was good enough at performing different voices to become a voice artist. He was recommended to be a voice actor by fellow voice artist, Daws Butler (Whom I shall also discuss). Together, they paved the way for new impressionable voice artists to pursue their careers.

Messick has been on radio as well. He was heard on such radio shows such as “Spotlight Playhouse,” Then NBC University Theater’s “Alice in Wonderland,” “Let George Do It,” and “Horizon’s West.” He’s also narrated for many animated programs such as “Ruff and Reddy,” “Time for Beany,” and “The Quick Draw McGraw Show.”

Don Messick has been long remembered after he left this world in 1997. He’s become a voice artist legend, one whose voices will always be remembered.