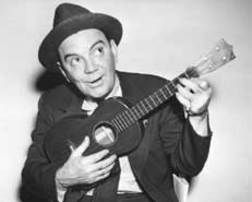 Born Clifton Avlon Edwards, Cliff “Ukulele Ike” Edwards is a name that not many people are familiar with today. Edwards started out on music, playing his signature ukulele. Later, Walt Disney got the idea to feature Edwards’ voice as the Robot Barber Chair on the 1937 Donald Duck cartoon, “Modern Inventions.” Afterwards, Edwards provided the familiar voice of Jiminy Cricket in “Pinocchio,” and as the voice of Jim Crow on “Dumbo.” You heard right; Jiminy Cricket and Jim Crow were voiced by the same man.

Cliff Edwards sung great songs as these characters, such as “Give a Little Whistle,” “When I See an Elephant Fly,” “I’m a Happy-Go-Lucky Fellow,” and his most famous song, “When You Wish Upon a Star.” Edwards’ Jiminy Cricket also had a few spots after the “Pinocchio” movie such as “I’m No Fool,” “You and Your Senses,” “The Nature of Things,” and the “Encyclopedia” series.

Cliff Edwards’ wide vocal range has entertained people for many years, up until his death in 1973. A few people still remember the care and skill he brought into all of his performances, and I for one am one of those people. May his signature song, “When You Wish Upon a Star” continue to fill our hearts with hope and faith as years go by.