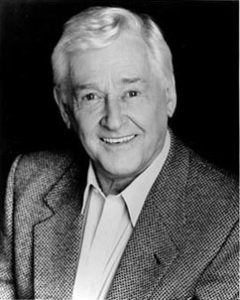 Angus “Alan” Young is an actor that I’ve known about for a very long time. He has provided voices for characters like Farmer Smurf on “The Smurfs,” Haggis MacHaggis on “Ren and Stimpy,” and surpassed Bill Thompson and Will Ryan as the voice of Scrooge McDuck for various Disney projects.

Young was also highly successful in the television world. He was perhaps most famous as Wilbur Post on “Mr. Ed.” He also played as Norman on the TV movie, “Earth Angel,” and was   Alan on both the Radio and TV’s adaptation of “The Alan Young Show.”

In live action films, he’s been in quite a few, like “Margie,” “Androcles and the Lion,” and “The Time Machine.” In animated films, his voice can be heard as Hiram Flaversham on “The Great Mouse Detective,” The White Knight on “Alice Through the Looking Glass,” and as previously established, Scrooge McDuck on “DuckTales the Movie: Treasure of the Lost Lamp.” On radio, he co-hosted with Jimmy Durantee on “The Jimmy Durantee Show,” and he also appeared on “The Jack Benny Show.”

Alan Young was indeed very talented. His loss was indeed tragic, as his performances will be remembered for a long time. He shall be missed.

With a heavy heart, the world says goodbye to Donald Harvey Francks. Though I have not seen all of his works yet, I will remember him from what I did know him as. Those works include Skunk on “My Dad the Rockstar,” Chauncey “Boss Mouse” Barns on “Eckhart,” Mok Swagger on “Rock and Rule,” and Grimaldi on “Heavy Metal.”

Francks’ daughter, Cree Summer, is still living strong. She will continue on his legacy of being a talented, amazing, and wonderful voice artist and singer.

Don Francks; though we have never met, I wish to send you a prayer of no longer being in pain and leaving behind such talented people in the form of your offspring. Rest well, and continue to inspire us all.

All information you see here is property of their original owners. All rights reserved.